Riecoin projects, proposals, bounties, discussions about existing Riecoin software,...
Forum rules
Discuss about Riecoin projects like software directly using or supporting the Riecoin's network, allowing Riecoin integration in third party services or providing useful applications. For external projects that make use of Riecoin, discuss about this in the External forum (even if your project is not completed).
Post in the subforums below if applicable.
Post Reply
4 posts • Page 1 of 1

Please upgrade as soon as possible to ensure a smooth Soft Fork! 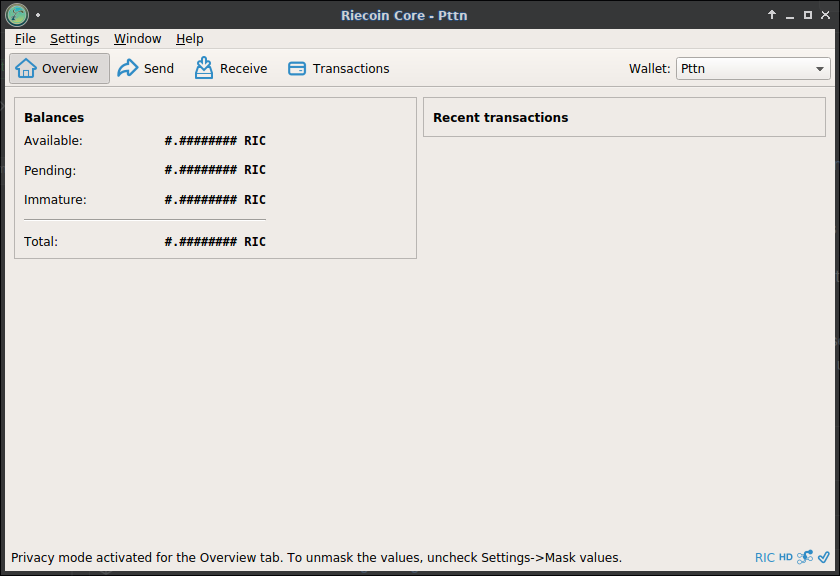 Only discuss about the 0.21 version here.
Please report bugs here. Suggestions are welcome here, but a new topic should be created in the Improvement Proposals subforum for important or controversial improvement proposals.
Don't ask for technical help, for this browse the Help subforum or open a new topic there. Be sure to have read and followed correctly the guides!
Riecoin developer
Top

The more versions we skip between Riecoin releases and the more difficult upgrades are, so I will start porting the recently released Bitcoin Core 0.21 base code to Riecoin. Hopefully I will be able to release it soon after the Fork.
I don't plan to add particular features to this version, but this might be done on 0.22 and later.

I worked on the code lately and finished it. You can find the code in my repository and binaries built with Gitian.

The software should work fine, but I am letting some time so everyone can test it to confirm that it is ready to be a Stable Release. Please give some feedbacks! If there are no issues I will release in about a week in the reference RiecoinTeam repository.

Some Test Units are failing but it was already the case for 0.20, though in almost every case there is a good explanation for the failure (most of the times due to the stricter Timestamps Checks). It is really a pain to fix all of them and not worth it as the work must basically be redone anyway at every major update... Though fixing them would be an excellent exercise if someone wants to learn about Bitcoin/Riecoin Core and make valuable contributions.
I do not even longer bother to make Travis pass, as long as make check and src/test/test_riecoin pass, and just a minority of tests launched by test/functional/test_runner.py fail, I will be satisfied and consider that the code is solid enough.

Bitcoin 0.21 introduced very interesting features. The Taproot/Schnorr Signatures code is included and works well (the feature_taproot.py test passes for Riecoin). These features improve the scalability and privacy of the network, you can easily find more info about them.
They need to be activated via a Soft Fork like Segwit, though the activation process is currently set in neither Riecoin nor Bitcoin Core (no start/end time). There is no opposition to these changes in the Bitcoin community and we should definitively activate them in Riecoin as well like Segwit. I have read a lot of debates about how to activate this, in our case we should do like Segwit and activate once 75% of the blocks signal support for Taproot (Bip9 Activation). We had issues for Segwit only because this was initially set to 95% and a couple of miners did not bother to upgrade, but I am confident that we can easily have more than 75% of the mining power supporting the upgrade fairly soon and that no one would actually oppose to this upgrade. So unless there is someone opposing to this change, I will already activate the Soft Fork in Testnet and start the activation process at the Stable Release for Mainnet.

There is a new Signet Network Mode, however I did not really look into it nor test it. Testnet and Regtest are more than enough for Riecoin so I would rather work on it later for 0.22 when I will have more time. Of course if someone is interested in working in it that would be welcomed as well.

There is a more modern wallet type, the Descriptor Wallets. For most users, not much will change, but internally and for developers there are many advantages. They are incompatible with the current Legacy Wallets (not to be confused with Legacy Addresses) and Bitcoin will drop support of them in 2023 according to this roadmap. The Descriptor Wallets are considered experimental and should not be used for now, though advanced users may start looking into it and already prepare for this transition.

Regarding Riecoin specific changes, the Mining Power metric after the Fork is fixed (it mistakenly still used the previous Minimum Difficulty as a reference). Some small code refactoring was done. And a Default Fallback Fee is now provided (which suppresses a very annoying Error Message when sending coins).
Riecoin developer
Top

Taproot/Schnorr is already activated on Testnet, though usable only if you upgrade to 0.21. I made a couple of Taproot transactions there without issue, you can find one in Block 99256, involving the Address tric1p6qgyt6ag9xa7fxdva2wa56z45rhfdp6kn7l3r98v4ctulvtsqy7s94c2hz (note the p, which means Segwit V1, instead of the usual q for V0; these addresses are also a bit longer). If you want to play with this before it gets implemented in user friendly interfaces then you can either try doing it from scratch by reading the Bips 340-342 or take inspiration from this repository https://github.com/bitcoinops/taproot-workshop (obviously a few adaptations needed for Riecoin).
Important: the Bech32M update is not yet included in Riecoin Core, so once it will, the Checksums from ric1p addresses (latest 6 characters) will be different. This has no incidence to current ric1q addresses.

In the immediate, there will not be significant benefits from the Soft Fork for most users, but for the long term we should activate Taproot like Segwit and benefit from future developments that will require Taproot/Schnorr Signatures. Given the universal consensus in the Bitcoin community, it is best to just go straight to the goal and activate quickly without delaying pointlessly and have issues like we had with Segwit because of a minority of miners and nodes not cooperating. So the activation process is summarized as follows:

After the Soft Fork, invalid Taproot transactions will be rejected by 0.21 nodes, but still accepted by old ones. I am confident that by the time 75% of the mining power supports the Soft Fork or in two months, most including important actors like exchanges will have upgraded, so we should not encounter issues in practice.