Riecoin projects, proposals, bounties, discussions about existing Riecoin software,...
Forum rules
Discuss about Riecoin projects like software directly using or supporting the Riecoin's network, allowing Riecoin integration in third party services or providing useful applications. For external projects that make use of Riecoin, discuss about this in the External forum (even if your project is not completed).
Post in the subforums below if applicable.
Post Reply
5 posts • Page 1 of 1

After the 0.21 upgrade, I will have to take a break from Riecoin for a couple of months. I will still be around, though not actively developing. But let's already open the discussion about Riecoin Core 22 (yes, Bitcoin Developers decided to drop the 0.; Btw we could also decide to name our versions distinctly from the Bitcoin's ones), suggestions are welcome!
And if someone would like to do some Core development that would be welcomed as well, I would be glad to teach what I know!
Riecoin developer
Top

It took a while more than I wanted due to various reasons, but finally, I finished the upgrade.

The binaries will starting from now be hosted on Riecoin.dev and I will push the new code soon. Prerelease binaries built with Guix (Bitcoin no longer uses Gitian) can be downloaded here.

Despite not being releases, they should already be safe to use for production. It is recommended to read points below, though, and as usual backup your wallets just in case. I am letting a couple of weeks so everyone can test it to confirm that it is ready to be a Stable Release. Please give some feedbacks!

Firstly, take a look at the Bitcoin's 22.0 Changelog: https://bitcoincore.org/en/releases/22.0/
The change that will likely affect advanced users the most will be the "#20286 Deprecate addresses and reqSigs from RPC outputs (mjdietzx)" one. This change may require developers to change some code: basically, wherever there is something like ['addresses'][0], replace it by just ['address']. The "-deprecatedrpc=addresses" has been removed in Riecoin 21.10 as well, better fix the code now than procrastinate.
I did not check if it affects NOMP-RIC.

As usual, a minority of Test Units are failing but they should not question the well functionning of the code. You can also read the paragraph about that in the previous 0.21 topic.

Unlike the previous release, there is no Soft Fork so an upgrade is not absolutely necessary, but still recommended for yourself as the more versions you skip and the more you will have to catch up with new or deleted features.
The Taproot Soft Fork has been hardcoded/buried.

The Protocol Version was reverted to Bitcoin's 70016, there is no practical reason to have our own Protocol Version. I don't know why Gatra set it to 10070001. But with this change, it will be easy to get rid of obsolete clients by disconnecting any node using the 10070001 version in a future release.

I still did not touch the Signet Network Code, if someone is interested in working in it that would be welcomed.

In Riecoin 21.10, we are taking a step ahead from Bitcoin regarding Descriptor Wallets. As a reminder, these are a new kind of wallet that will replace the current ones (Legacy Wallets). Support for Legacy Wallets will eventually be dropped, so actions must be taken to avoid a painful transition where many people are still using them. Because we are a much smaller network, we can afford to accelerate the transition.
They plan to generate Descriptor Wallets by default only starting from 23.0, but in our case Riecoin 21.10 will already do it and prevent the creation of new Legacy Wallets. I and many other Bitcoin users used Descriptor Wallets without issues so far.
I wrote a guide explaining how to move funds from Legacy Wallets to Descriptor Wallets. It is highly recommended to move your coins as soon as possible. This would also be a great preparation for Bitcoin as you will eventually have to do it for it too.

Regarding Riecoin specific changes, there is now a way to get the Constellation Pattern or Length without having to write external code, via the getresult call: add a true boolean after the block hash.

Messages can (and must) now be signed with Bech32 addresses.

A Code Generator feature was also added, so it is now possible to use Riecoin Addresses to authenticate yourself as replacement to Google Authenticator or other 2FA things. I will open my own Riecoin Pool and a Riecoin Faucet this month taking advantage of this feature, but I would love if someone else implements support of authentication via Riecoin Addresses in their services too.
The big advantage over Google Authenticator is that even if your service gets hacked (and it happened not too long ago on the C-Patex Exchange), private keys cannot be stolen.
The Code Generator is simply based on the message signing features, using the current time as a message.
It might be improved to produce shorter codes in the future to avoid requiring copy-paste, but as is it works very well too... 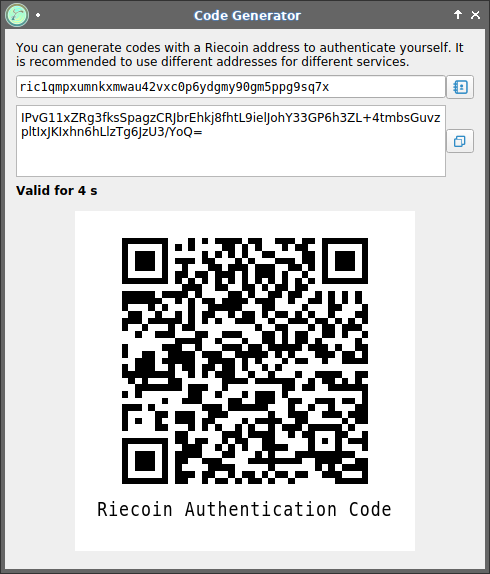 Nice Pttn! I'm running 21.10 pre-release since a couple of days without problems. I didn't encounter issues with the descriptor wallet, the migration went fine.
Top

Thank you for your feedback!
Riecoin developer
Top
Post Reply
5 posts • Page 1 of 1