Riecoin projects, proposals, bounties, discussions about existing Riecoin software,...
Forum rules
Discuss about Riecoin projects like software directly using or supporting the Riecoin's network, allowing Riecoin integration in third party services or providing useful applications. For external projects that make use of Riecoin, discuss about this in the External forum (even if your project is not completed).
Post in the subforums below if applicable.
Post Reply
7 posts • Page 1 of 1 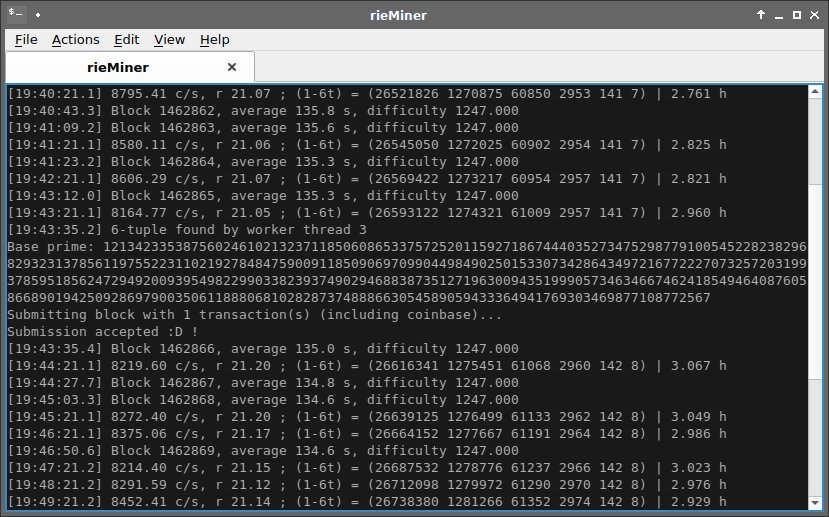 Suggestions are welcome here, and please also report bugs here.
However, don't ask for technical help, for this browse the Help subforum or open a new topic there. Be sure to have read and followed correctly the guides!
Go to the Mining subforum to discuss about optimal settings for your system or read this guide.
Riecoin developer
Stelo.xyz pool operator
Top

I would gladly build 0.92d and later using -march=haswell or so, but apparently some still mine on old Ivy/Sandy Bridge or even Nehalem CPUs, even recent Pentiums/Celerons do not have AVX2, and only a minority would bother building rieMiner...
Riecoin developer
Stelo.xyz pool operator
Top

Darn, I realized that one of the modifications causes an issue when running multiple instances of rieMiner. So I fixed it and am already releasing the Revision d. It also adds Primorial Offsets for 7, 8 and 9-tuples, allowing up to 64 Sieve Workers.
Riecoin developer
Stelo.xyz pool operator
Top

In these situations, we could find so much more interesting constellations, but there is a really long way before reaching 2000 levels, it would require about 1700x more mining power compared to now, unless one finds significant improvements for the Sieving phase...
Everyone, keep mining and spreading the word!
Riecoin developer
Stelo.xyz pool operator
Top

Time for a small revision 0.93a.
As always, download the newest binaries here. https://riecoin.dev/resources/Pttn/rieMiner.php

- Fixed a bug;
- Total Physical Memory is now a factor used to determine the default PrimeTableLimit, which should no longer have to be set manually if having less than 8 GiB of Ram;
- No more donation;
- Added a basic rieMiner Api, initially to help HiveOs integration;
- Build system significantly changed, now using Cross Compilation not just for Android, this makes the creation of official binaries much easier. Msys is no longer used/supported;
- Some other code improvements.
Riecoin developer
Stelo.xyz pool operator
Top
Post Reply
7 posts • Page 1 of 1

Users browsing this forum: No registered users and 0 guests